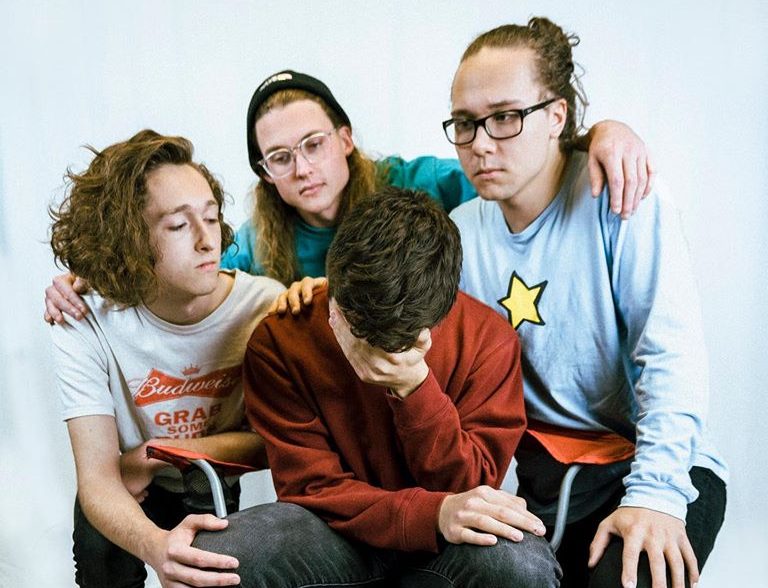 THAT AIN’T FALCO: HOW DOGLEG CHANGED THE GAME WITH MELEE

This piece doesn’t need a flashy opening. If you will take anything from this article, let it be this: Dogleg is one of the bands to watch out for. And their debut album, Melee, which dropped this past March, is one of the albums of the year.

From the moment the album opens with “Kawasaki Backflip,” it takes the listener on a rollercoaster of endless, fast-paced punk laced with meaningful lyrical work and incredible production. To say that the Detroit-based four-piece has ‘reinvented the wheel’ would be an understatement to just how high they have set the bar for the rest of the scene.

“Throughout writing and structuring the album, we have tried to make sure that every single song was up to a standard of high quality, and that there were no songs that would be seen as superfluous or filler tracks. No interludes, no samples, no bullshit – we wanted it to be straight to the point and 10 songs worth of intensity and emotional outpouring,” stated Alex Stoitsiadis, the lead singer, guitarist, and founder of the once solo project.

Formed as a method for Stoitsiadis to express himself creatively, the solo project continued to grow into the band as it is now.

Named after a fellow Detroit band, Bear vs Shark, and their track, “Broken Dog Leg,” he expressed his pride in being able to carry the torch of talented bands from the area, “I love the MC5, Death, the White Stripes, and all those other classic legendary status bands from here, and I’ve always had a huge love for those classic Motown heartstring-puller songs. Some classic foundations of emotional music right there.”

The band’s lineup comprises Stoitsiadis, Chase Macinski, Parker Grissom, and Jacob Hanlon. Growing in size, Melee is the product of their growth.

My biggest complaint with the album lies in that it’s impossible to listen to only one track without wanting to listen to the whole album. The tracklisting fits so smoothly, which, for an album that is not only fast but loud, is an accomplishment.

On pace, where so many bands often slow down an album to avoid overwhelming the listener, Dogleg worked against the grain and made a sound that they wanted to hear.

“We tried to keep it intense the whole way through, which is how a punk-adjacent record should be. That’s not to say that there shouldn’t be moments of quiet, though! We all tried to make sure that each song had just the right balance of tension and release so it didn’t all sound the same when listening all the way through. I’m proud of how it all turned out. It’s relentless, as it should be.”

As already mentioned, what’s remarkable to me is what the group can carry out with their sound. With the ability to carry the thrash noise of a Title Fight track to the glam sound of The Get Up Kids, there’s something to pick out every time you listen, and none of the 2,140 seconds that make up Melee are wasted.

Tracks like “Fox” and “Wrist” unfortunately serve as a reminder of what we don’t have in gigs because of the ongoing COVID-19 crisis — despite this, it is an album worth celebrating.

Yet, the highlight of the LP comes right at the end, with the appropriately titled, “Ender.”

Clocking in at over six minutes, the track follows much of the path it paves to that point. Right when you think you’ve figured out where the band is going, they throw one final knuckler in a minute-long, orchestral ending.

Almost humorously, this loud and chaotic piece of art ends in the most gentle way imaginable. Citing …And You Will Know Us By The Trail Of Dead’s album, Source Tags & Codes as inspiration, Stoitsiadis saw the potential for the idea as he wrote it out.

“The album hit me like a ton of bricks emotionally, and that ending was just so vital and raw that I wanted something that could match that. In demos of the song, I had that riff played out on a synth keyboard and I liked how it provided this soft but raw ending to it all. But I thought bringing in real strings and horns for it would top it off perfectly.”

As he explained, contrary to how I initially interpreted the ending, there was a much darker and intense twist behind it all.

“It paints this scene of someone that is so caught up with never being good enough that they contemplate suicide over it, and the final drum hit kind of plays like a final gunshot and sounds like one too – which gave me major fucking chills when I heard the final version. The strings then come in as some overture as that person kind of ascends, so to speak. It’s deeply personal to me and I love the vibe it gives.”

“Overall, we wanted to make it a definitive, epic, and emotional ending, and I think it works extremely well.”

It’s a jaw-opening ending; for such a chaotic album, for it to end so gracefully is not only funny, but interesting and clever. Dogleg makes music that begs to be performed in front of a live audience, after 2020 fucks off.

But for now, as with many other musicians, everything is paused — through continued promotion of social media (and a full merch store) Dogleg, like many others, is trying to keep moving.

“We’ve had a full year planned for Melee’s release and now it’s kind of gone up in flames like the rest of the world, which is a kind of odd and ironic twist for us. We joked about how long it took to finish the album and had a saying that the ‘sun will explode before the album is out.’ Now it’s out, and it looks like the whole world is on fire.”

Despite this, Dogleg is still a band worth celebrating as another incredible band to fit the “emo revival” genre.

“We have some more stuff coming to keep things rolling regarding momentum, but it is a bummer not being able to play the songs in front of people. We’re hoping to get to that point soon, and it’ll be even more ferocious and explosive from everyone’s anxiousness over getting that stuff back.”